Radian Weapons (AXTS) helped bring the AR-15 into the 21st Century with the introduction of their patented ambidextrous Radian Raptor Charging Handle. Not content to rest on their laurels, they have continued to push the envelope with the introduction of several new models incorporating several new patents. Each model brings interesting and innovative features to the lineup.

Before we get started, Radian Raptor charging handles all have several things in common.  Each has the original patented ambidextrous handle design. Every one has super tough 7075 MILSPEC Type III hard anodized aluminum construction and oversized roll pins for strength, a limited lifetime warranty and is 100% designed and manufactured in the USA.

Skip to a section: 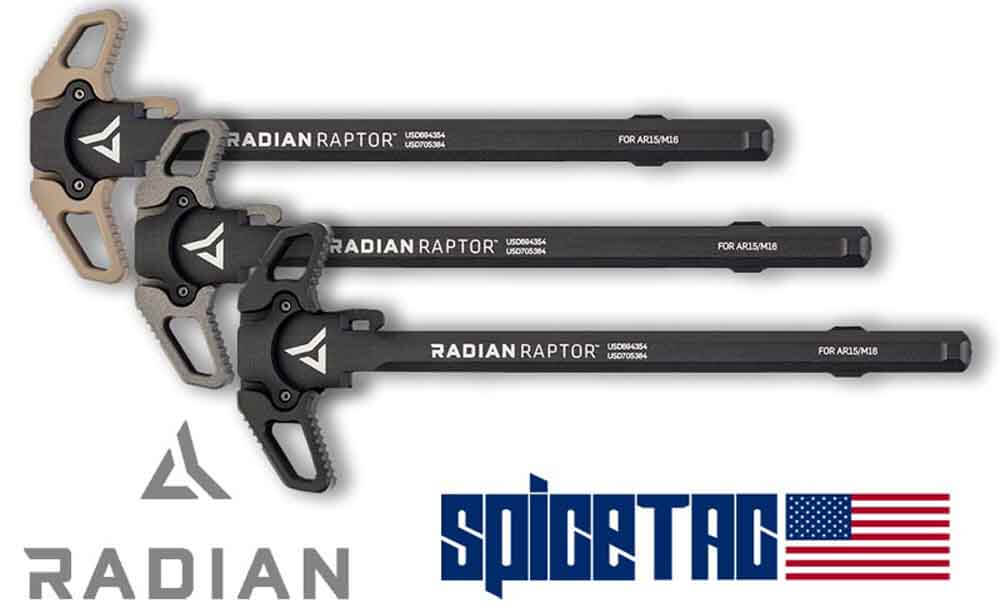 Above: The Original Raptor Charging Handle

This is the original design with all the ground breaking improvements from Radian Weapons.

Magnified optics can sometimes make it difficult to access a standard charging handle which must be worked from the left side. The Raptor solves that problem. In addition, the right side lever of the Raptor is slightly extended (more than the left) so that it can better clear the forward assist button.

On AR15s that have a slick side upper with no forward assist button, the Raptor's ambidextrous design and slightly extended right side latch makes working the bolt from the right side super easy and convenient.

Above: The combination of the Raptor ambidextrous charging handle and a slick side upper makes it super easy to operate the bolt on an AR15 from the right side

Looking past the design of the levers we find oversized roll pins that solve a weak point in the original design and MIL-SPEC hard anodized 7075 aluminum construction.

It's in the final execution though that Radian Weapons really makes the Raptor shine. The anodizing is a deep, rich black. The Flat Dark Earth (FDE), Tungsten Grey and Raptor Brown anodizing is very well done. The overall fit of the parts could not be better and there are no sharp edges left over from the manufacturing process.

The Raptor is a quality part that can be dropped into any AR15 and instantly improve it's usability well beyond what it's cost might suggest.

Above: The new Raptor colors are OD Green on the left and Radian Grey on the right 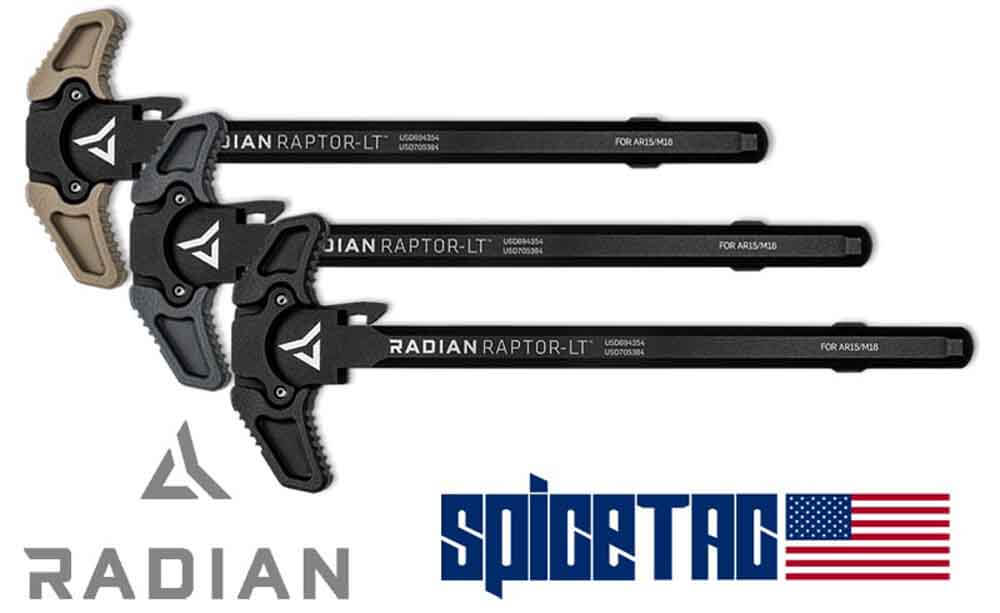 The "LT" designation for the Raptor is thought to mean lighter weight and it does weigh less than the original Raptor by 0.1 oz (1.2 oz vs 1.3 oz) which is actually 8%. See the weights of all Raptor charging handles here: Raptor Weights.

In military rank, "LT" designates a 1st or 2nd Lieutenant. This is an officer of the most junior rank often thought to be unable to command much respect.

As it applies to the Raptor LT there might be some truth to that but it comes from the misunderstanding that the LT is somehow made out of plastic or polymer. The LT is frequently referred to as the "plastic handle model" or as having "polymer handles" (even sometimes by Radian Weapons).  This is a misleading description and is a disservice to this phenomenal charging handle.

A read through the specs reveals that, at its core, the handles of the Raptor LT are made from the same high strength 7075 MIL-SPEC anodized aluminum that all Raptors are made from. The LT just gets an added layer of high strength fiberglass reinforced polymer on top of that.

Above: Close up of the 7075 aluminum construction at the core of the Raptor LT handles

This method of finishing the handles is less involved than the machining and finishing operations required for the original Raptors and is what allows these to retail for 24% less than the originals.

The Raptor LT gets to deliver ALL of the innovative awesomeness with LESS of the price tag and that combo makes it a star in the lineup and is why it's become a runaway favorite!

Although identical in function, in actual use the LT handles have a slightly different feel than the all aluminum version. I would say it has a slightly more textured, warmer feel and it's one that some folks have expressed a preference for.

At the end of the day it would be a mistake to discount the LT. With the same tough mettle of its brothers, don't let the name or the price fool you. 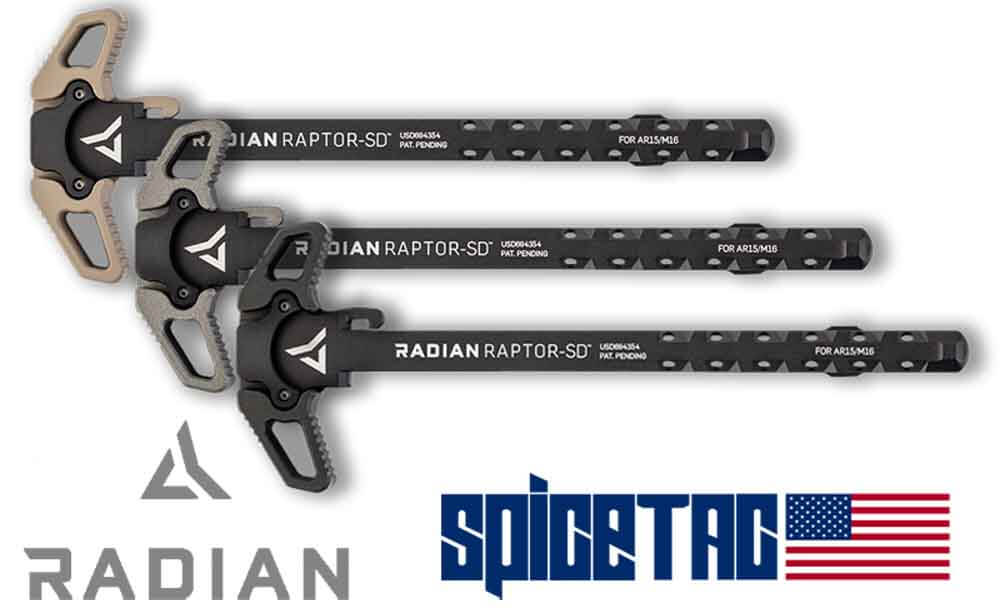 This is the silencer optimized version. The handles of the SD are identical to the original model and available in all the same color variations. The shaft is where the differences are and wow is it different! The shaft is full of vent holes that are designed to re-route gasses down and forward away from the shooters face while shooting suppressed.

Above: The vents in the Raptor SD charging handle shaft can be seen in this close up photo

This was an original idea and was innovative enough to earn its own Utility Patent from the U.S. Patent Office in Feb 2019 ("Charging Handle with Exhaust Ventilation" US 10,203,174). Patents are not cheap or easy to get so Radian Weapons clearly feels that this design is a winner. If feedback from the field is any indication, they are right.

There are a number of ways to mitigate the blowback of gas to the shooters face when shooting suppressed but few of them are as quick and easy as tossing in an improved charging handle. Plus the Raptor SD can be used with the other methods like adjustable gas blocks, etc.

Some people have taken to calling their Raptor SD the "Dragon". I guess it's because of it's toothy appearance or maybe it's because of how effectively it fights the gas blowback issue. The SD might be the first Radian Raptor to have it's own nickname!

For only a modest increase in price over the original Raptor, the SD has all of the original Raptor's goodness plus Radian's patented gas buster feature. If you shoot suppressed it might be time to consider putting the "Dragon" on your team!

The handles of the original Raptor are slightly extended compared to those of the basic GI charging handle. This slight extension helps make the Raptor super easy to grasp and is almost a necessity when dealing with some kinds of rearward mounted optics.

There was a need though for a lower profile option, one less prone to snagging on gear. Enter the Raptor SL charging handle!

Above: The handles of the Raptor SL charging handle are identical in function but reduced in size compared to the original Raptor

The handle width of the SL is 0.434" less than the original Raptor. This is close to a 1/4" shorter on each side and represents a 17% decrease. It doesn't seem like much until you handle one. This is a significant amount for this small part.

Radian's practice of making the right side lever longer than the left side seems to have been abandoned in this configuration in deference to the new compact dimensions.

Above: The handles of the Raptor SL (SD-SL shown) are similar in size to those of the original AR15 charging handle.

The reduction in handle width actually brings the SL's size down to approximately the same as the original AR15 charging handle. (Within one-tenth of an inch). All the goodness of the original Radian Weapon's design remains!

The Raptor SL successfully downsizes the Raptor's ambidextrous design into a sleeker, more compact charging handle less likely to snag and more comfortable against the body. 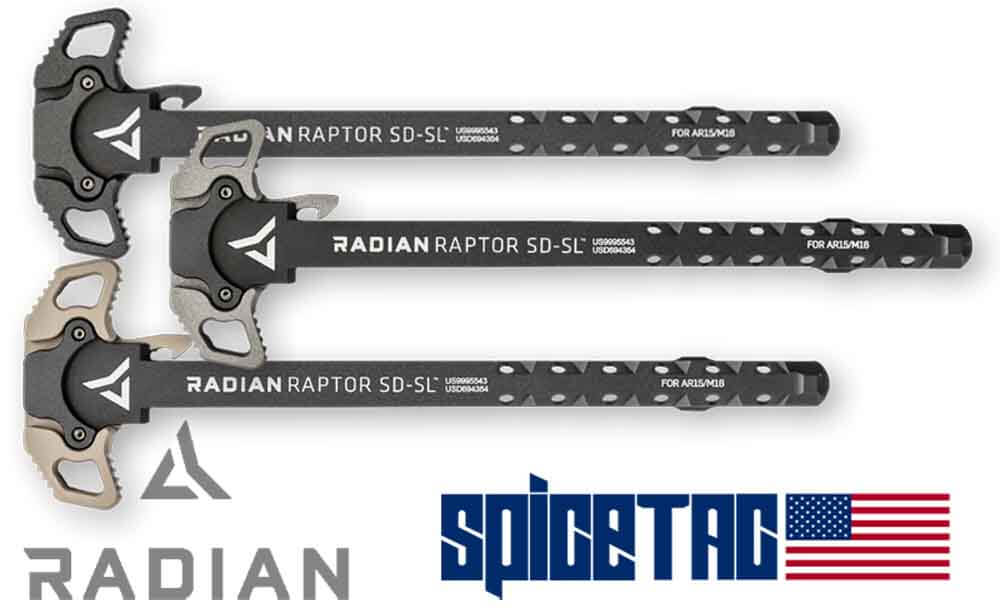 "I want it all, and I want it now!" So goes the song and so delivers the Raptor SD-SL!

This hybrid mates the slimline handles of the SL model with the ported shaft of the SD model to bring you the best of both worlds. Ideal for the AR15 shooter that is shooting suppressed and also wants the anti-snag features of the ultra low profile handle.

There is not much I can say about the Raptor SD SL that I haven't said about the other Raptors. It is an excellent product and if you have a need for a compact, suppressor optimized charging handle, the SD SL was tailor made for you!

Any Raptor charging handle is an excellent part for a new build or as an upgrade to an existing AR-15.  With this expanded selection, Radian Weapons has made sure that you can find the exact model that you need!

Note: Radian Weapons did not leave the AR10 out! A full line of AR10 charging handles is available, see our AR10 Charging Handles.

I set out to answer the question:

"How much does the Raptor LT charging handle weigh?"

Since I had the scale and the camera out I decided to weigh them all.

“Hey everybody, thanks for stopping by. The first thing we’re going to cover today is our rifle series which is the Model 1. Some of the feature sets on this rifle that are really unique would be the ADAC system which is ambidextrous dual action catch. You’re actually able to lock the bolt to the rear with the magazine relase and then release it from the right side which allows you as a shooter to stay under fire control while needing to clear a malfunction. So, just rack it back, push the magazine release, get a magazine back in there and then drop it home.

On the left side we actually have a left hand magazine release, bolt catch and bolt drop and of course our receivers feature our talon safety which is a modular safety which has either a 45 or 90 degree throw. Either one is acceptable and the levers are retained with a spring and retention pin instead of screws so you don’t have to worry about anything backing out. These are all machined in house and are guaranteed to be sub MOA accurate out of the box. The price range on all the rifles is going to be about $2500. They’re offered in 224 Valkyrie, a 10.5 223 Wylde, 300 Blackout SBRs and everything in between. So your 14.5’s, your 16’s and up to a 17.5” DMR setup.”

“Next we’re going to talk about the Raptor Charging Handle. The Raptor has been around for several years and is almost ubiquitous in the market. It is used by many OEM customers and is known for being able to get good purchase when you’re using a magnified optic. We have quite a few different versions of the Raptor.

We have the Raptor SD which actually has a ported shaft for suppressed shooting. It actually reduces the blowback that you experience as a shooter while using a silencer.

We have our slimline model [Raptor SL] with shorter handles for those who are concerned about gear snag.

We have our Raptor LT which has polymer handles and comes in at a more affordable $60 price point. And we have several other options to include color and NP3 coated finish.

These are all available at retailers nationwide or factory direct. It is a great product if you are wanting to upgrade your AR15 build or just take a mil-spec charging handle out and make your gun a lot better.” - Josiah Underwood, Radian Weapons