LOGIN For Member Pricing if Available

What’s the Difference Between a Full Auto and Semi-Auto Bolt Carrier Group?

One of the most common questions we see is some variant of “what’s the difference between a full-auto and a semi-auto bolt carrier group?”.

If you’ve wondered this yourself, have questions about the legality of a full-auto BCG, or just want to know more about the differences, we’ve got you covered. We’re going to go over all of the differences between the two so you can make an informed decision for your rifle build.

We’ll cover the basics, then we’ll go over the differences between the two more closely and finish up with some tips for how to choose the right bolt carrier group for your rifle. 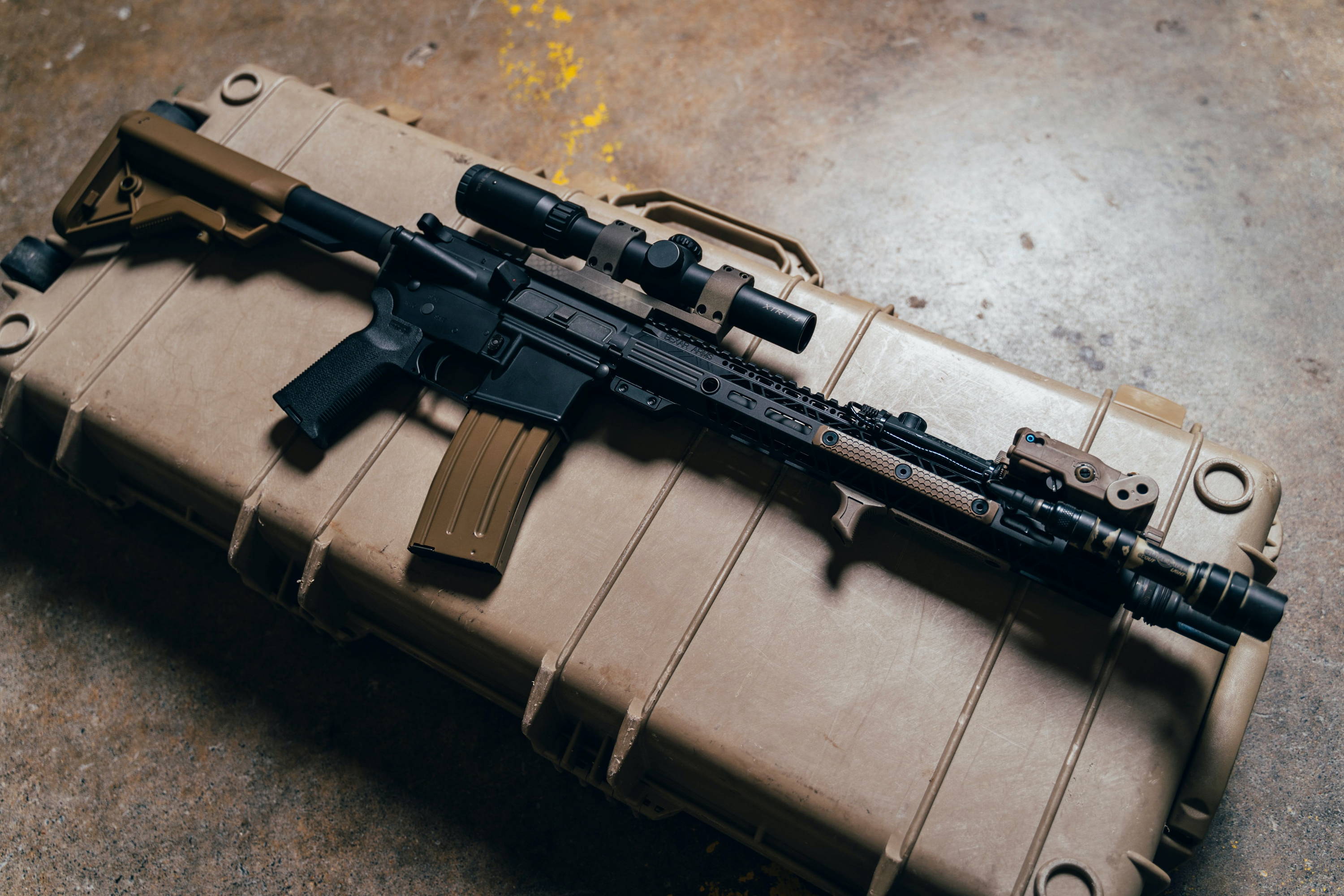 Let’s start with some bolt carrier group basics to make sure we’re all on the same page.

The bolt carrier group in the AR-15 is one of the most iconic parts of the platform and is a big part of why Eugene Stoner’s beloved creation has endured so strongly in the 70 or so years since it’s been around.

The bolt carrier group (or BCG) is what allows the firearm to chamber a round, ignite the primer, unlock from the chamber, push the buffer, and cycle the firearm again to fire another round. Let’s take a look a the individual pieces and how they work together.

Bolt Carrier: This is the bulk of the BCG and is the piece that holds everything else together. This is also what contacts the buffer and pushes the spring to the rear as gas expands inside it. With high pressure and temperatures, quality material and design are key here.

Gas/Carrier Key: On top of the bolt carrier you’ll see a protruding piece called the gas or carrier key. The gas key is what moves gas from the gas tube and into the bolt carrier itself. This is also what unlocks the bolt and allows the whole assembly to move to the rear.

Bolt & Extractor: The front of the BCG is the bolt itself and the extractor. This is what allows the BCG to lock and unlock during the firing cycle. The bolt face is the piece that grabs each new round to be chambered and the spent casing to be ejected.

Cam Pin: Lastly, we have the cam pin, which is inserted through the side of the carrier and a hole in the bolt. This pin keeps the bolt from over-rotating when the gas key unlocks it. It also has a hole in the middle for the firing pin to pass through, which helps keep everything oriented properly.

Despite the name, a full-auto or M16 bolt carrier group does not actually make your firearm fully automatic. Rather, these are parts that are designed to work with full-auto parts in a select-fire trigger group.

The big difference is the bolt carrier group is left intact at the rear and has a large lug on the bottom designed to trip a full-auto sear. The full auto lug doesn’t do anything without a (highly-regulated) fully-automatic sear and lower receiver, so it’s not regulated like those parts are. Because of this, FA BCGs have become the default over the past decade or so.

So, to be clear, a full-auto BCG will not make your gun fully automatic, so don't expect full auto fire with a simple M16-type BCG. Why, then, do we bother with full-auto bolt-carrier groups these days in civilian guns?

Simple: they’re heavy. Heavy is good. Heavy is reliable. The full-auto bolt-carrier group has extra weight and more mass, which means it absorbs heat better, which in turn means it doesn’t wear down nearly as quickly.

This is basically the same reason for things like bull barrels in precision-style AR15s. More metal/mass means better heat dispersion, which makes the whole system more reliable and less prone to wear.

When comparing shapes, you’ll immediately notice that the full-auto BCG is longer and heavier, and has an additional lug at the rear opposite the actual bolt face. This is the part that engages with the full-auto-sear release in a select-fire firearm.

Just to reiterate, by itself, a bolt carrier group will not create a fully-automatic AR, and there are currently no legal restrictions on them as it is the lower receiver and trigger group that are actually the restricted parts.

How Does a Full-Auto BCG Perform?

The chief benefit of a full-auto bolt carrier is that it has more mass. That additional mass makes it a bit heavier, which can improve reliability and reduce recoil as more of the force of the ignition gases will go towards moving your BCG.

Most of that effect is going to depend on your spring and buffer, but a heavier bolt carrier group also helps and can provide a noticeable difference.

The second benefit of the additional mass means that your bolt carrier group is stronger, less prone to damage, and (in theory) more reliable. More mass means better heat absorption and dispersion, which means considerably less wear on your parts.

This is a huge boost for the longevity and reliability of your gun and helps to avoid wear that can cause major malfunctions. That’s why, these days, most shooters recommend a full-auto bolt carrier group, usually with a nickel boron or black nitride coating for extra wear resistance.

Key Differences in a Semi-Automatic BCG

When you pick up a semi-auto BCG, the first thing you’ll notice is the area where the semi-auto carrier is cut down at the rear and the fact that it isn’t as thick.

The thicker area on a full-auto bolt carrier group is what interfaces with the auto-sear, and obviously, we don’t need that on a semi-auto-only carrier.

While this does mean you lose the benefits of a full-auto bolt carrier, there are still some benefits to the semi-auto BCG.

Notable Benefits with a Semi

The chief benefit of a semi-auto bolt carrier is the fact that it is lighter, which can improve the cyclic rate of your AR-15 assuming you have a tuned trigger and the skill to make the faster cyclic rate a meaningful change.

In other words, you probably will only notice the difference if you’re a serious competitor. That’s pretty much the only place you’ll see meaningful improvement from a lighter BCG, and even then, a heavier full-auto BCG may still give you more benefits.

Still, it's always good to have options and the increased cyclic rate is great for competitors who are chasing faster split times.

There are several great BCG brands out there, from mil-spec BCGs that are reliable and affordable to high-end precision-machined offerings that are suited for everything from serious tactical use to competition.

Aero Precision: Aero Precision has become one of the defacto choices for AR-15 builders because of its great selection of products, incredible machining, and respectable value. If you aren’t sure what brand you like, Aero is a good place to start your search.

Radian: Radian is another high-end manufacturer, mostly known for their charging handles (the awesome Raptor series is a fan-favorite in the community) but they also make kick-ass BCGs as well. Their Enhanced BCG in particular stands out as a great mil-spec-style BCG.

Toolcraft: Toolcraft has a wide range of BCGs available from mil-spec Nitride options to high-end MPI Nickel Boron coated ones that are super slick.

Palmetto State Armory: If there’s a poster child for affordable AR-15 parts, it's good ole Palmetto State Armory. Proving cheap doesn’t mean cheaply made, PSA has been pumping out a variety of quality components and completed rifles that perform great without breaking the bank.

SpiceTac Has the Best BCGs for Dependability & Accuracy

At SpiceTac, we pride ourselves on carrying high-quality parts, including a wide variety of M-16 full-auto style bolt carrier groups from brands like Toolcraft, Aero Precision, and FailZero. We carry full-auto BCGs to provide our customers with those high-quality benefits a heavier part has to offer including reliability, recoil reduction, and overall longevity. Our products have been tested and proven in the field. Most of our BCG offerings have been Magnetic Particle Inspection (MPI) tested to ensure quality metallurgy.

As gun enthusiasts, we know what it’s like to have parts fail in the field. It sucks. To avoid that for everyone, we only carry products that we know and trust ourselves. If we can’t depend on it, we don’t expect you to either.

If you’re looking for a BCG, whether you’re starting your first build or upgrading your firearm we’ve got you covered with a selection of high-quality options.